Israel & Jordan, Experience of a Lifetime!

I want to share with you our most recent trip that took us to Israel and Jordan. It stared out with a night in New York City at the Marriott Marquis in Time Square that included an awesome dinner at New York’s only revolving restaurant which happens to be located on the 48th floor of our Marriott called The View.

Trust me … it doesn’t get much better enjoying a glass of Champagne along with an exquisite meal in a restaurant that offers panoramic views of New York City and the Jersey shores. I want to also thank the Marriott management for the awesome room that had great views of Time Square. We did plan on taking in a Broadway Show however our flight was delayed, so we settled for a long leisurely dinner.

The next morning, we planned on being at the airport three hours prior to our flight. It offers plenty of time to get our luggage shrink wrapped and checked in. Our fight was to take us from JFK to Istanbul Turkey then on to Tel Aviv. Since we were flying business class, we were able to hang out in the admiral’s lounge at JFK … our flight was scheduled to leave on time. It was our first flight with Turkish Airlines (A330-300) they have a reputation for having the best food in the sky along with extensive wine list along with specialties drinks. First, those traveling in business class, were greeted personally by a “Chef” on board that prepares your meal. He hands out the menu and goes over it with every business class passenger. While I agree the food was probably the best my wife and I ever had in the sky … when it came to space and comfort, Turkish Air will remain behind others we’ve flown business class like KLM, Air France and British Air. For example, other airlines offer larger restrooms along with multiple ones in business class … Turkish only had one restroom upfront and it was the standard size. Also, the comfort just wasn’t’ there with the seating that rolls out to a bed.

Our flight landed on time in Istanbul Turkey. It was a welcomed surprise not having to go through customs since we were connecting to another city. For those flying business class on Turkish Airlines they offer an incredible three-story lounge at the airport … all food and drinks included. 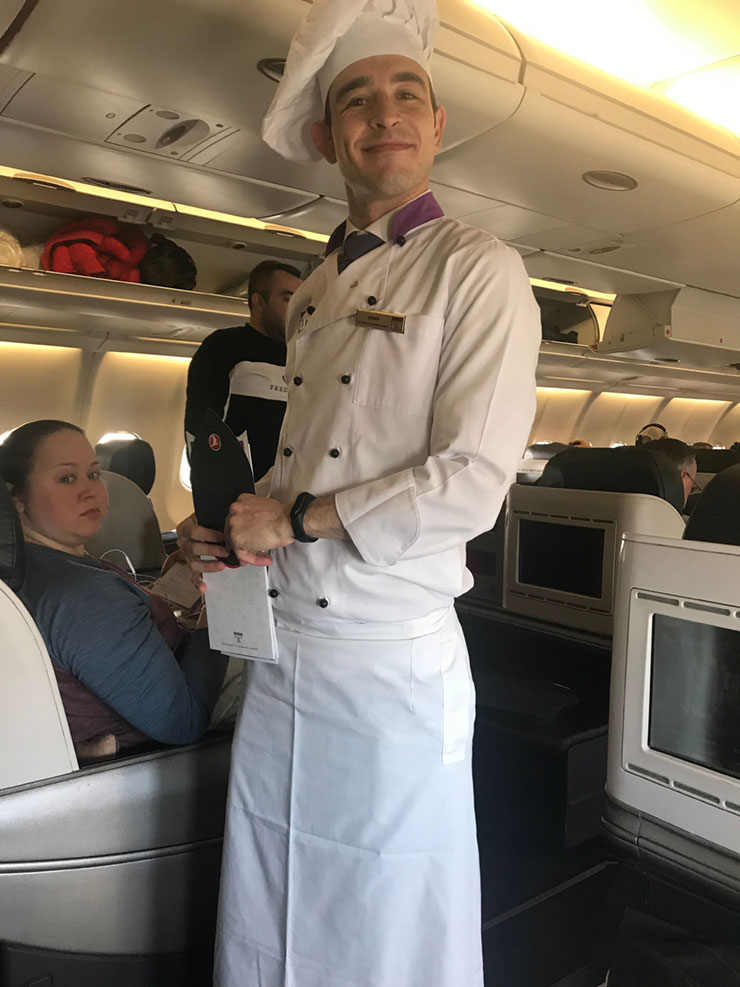 From Istanbul, we had a 2-hour flight to Tel Aviv … going through customs was easy along with getting our transportation to the hotel. Our tour was to start with a welcome dinner on Monday eve, we flew in Sunday afternoon to join our friends for a couple of walking tours on Monday. We booked an extra night in the beginning where our tour would begin staying at the Dan Panorama in Tel Aviv. All accommodations for our two-week vacation were at 5-star hotels. Here’s our itinerary after we arrived in Israel:

Day 1 Monday:
Our friends arranged for us to go on two walking tours in Tel Aviv … our guides were very knowledgeable and gave us a great tour of the city. That night we had our welcome dinner and met our guide in Israel … Eran Ozeri. We could tell right away he had a lot of experience and was going to be very informative as our guide this week. We highly recommend Eran for your tour needs if you travel to Israel … you may contact Eran through his website at http://www.eyeonisrael.com/bootstrap-3/index.html.

Day 2 Tuesday:
Our first stop was in Jaffa for a walk through the beautifully restored ancient port where medieval pilgrims started their strenuous 2-day trek to Jerusalem. We then, continued our tour of the Holy Land to Caesarea, the perfect place to learn about the Roman and Crusader presence in the country. Next, we paid a visit to the Roman Amphitheater and the impressive Crusader Fortress, then Herod’s stadium and harbor. Our next stop - Nazareth in Galilee, where we paid a visit to the contemporary Church of the Annunciation. From there, Cana, site of the first miracle where Jesus changed water into wine at a wedding. To this day, many couples renew their wedding vows at this sacred place. Our day ends when we arrive in Haifa, a city with a long history dating back to biblical times.

Day 3 Wednesday:
Today we start our day with a visit to the golden-domed BAHA’I Shrine, the world center of Baha’i faith. Heading towards the Sea of Galilee, we paid a visit to the Mount of Beatitudes, where Jesus delivered his Sermon on the Mount. Then we proceeded to Capernaum, where Jesus recruited his first followers among the fishermen … via the ruins of KURSI, we arrived at the Jordan River to visit the Baptismal Site, followed by a relaxing cruise on the Sea of Galilee.

Day 4 Thursday:
First up, a drive into the ancient land of the Philistines and the Valley of Elah. We stopped at the site of David’s victory over the Philistine champion Goliath to hear about this biblical event. Later, we heard the tale of Samson and Delilah as we traveled through the land of the Dan tribe to the wide Valley of Ayalon. At strategic Latrun, we saw the MONASTERY OF THE TRAPPIST MONKS. Next, in route for a breathtaking panoramic view of the Holy City of Jerusalem, considered one of the oldest places in the world, with a history dating back as far as 4000 BC. Our tour then proceeded to Bethlehem to see Shepherd’s Field where the angels announced the birth of Jesus. Finally, a visit to the CHURCH OF THE NATIVITY, which stands on the site where Jesus was born. We will be spending (4) nights in Jerusalem staying at the Dan Jerusalem Hotel.

Day 5 Friday:
Today we started early and paid a visit to the ISRAEL MUSEUM with the Shrine of the Book and the Dead Sea Scrolls, followed by the YAD VASHEM MEMORIAL which was created to commemorate the six million martyrs of the Holocaust. We continued to MOUNT ZION and viewed the UPPER ROOM where Jesus and his disciples had the last supper … we ended our day with a visit to the TOMB of KING DAVID.

Day 6 Saturday:
This morning we started with a visit to the GARDEN TOMB. After seeing a stunning panorama of the city from the revered MOUNT OF OLIVES, we began our guided walking tour. Via the Chapel of Dominus Flevit, designed in the shape of a tear drop to symbolize the tears of Christ, we then arrived at the GARDEN of GETHSEMANE where Jesus prayed the night before his arrest. Nearby are the Caves of the Assumption of Mary and of the Betrayal. Our tour guide led us through the Stations of the Cross along the VIA DOLOROSA to Golgotha and stepped inside the CHURCH of the HOLY SEPULCHRE. Erected over the site of the crucifixion, this church is shared by six Christian communities. We also saw the Temple Mount and the Dome of the Rock, a splendid mosque on the holy mount … we continued to the WESTERN WALL, the most holy shrine in the Jewish religion.

Day 7 Sunday:
Our day started with a drive through the Judean wilderness to the Dead Sea, the lowest point on the surface of the Earth. We enjoyed the scenery on the road between the salty water and majestic desert mountains. We saw several caves of Qumran, where the precious Dead Sea Scrolls were found. We then went by cable car to the spectacular cliff-top FORTRESS of Masada to hear how 960 Jewish zealots preferred death at their own hands to the indignity of surrender to overwhelming Roman forces. Around lunchtime, we reached one of the comfortable Dead Sea resorts to experience the feeling of buoyancy in the heavy water. Our day ended with the return to Jerusalem.

Day 8 Monday:
Today we drove across the Allenby Bridge that will bring those that are continuing to Jordan. We drove north to JERASH, which was inhabited as early as 3200 BC. Although the city was impacted by the earthquake of 749 AD, it is the site of the best-preserved Greco-Roman ruins in the Middle East. Next up, our arrival in Jordan’s capital, Amman. Our stay will be at the beautiful Kempinski Hotel … between the room and food, if there was such a thing as a Six-Star Hotel, they would get all six stars!

Day 9 Tuesday:
On the program today is a visit to Wadi Rum. Wadi Rum is the largest wadi (ravine) in Jordan and made famous in the movie Lawrence of Arabia. We took a spectacular FOUR-WHEEL DRIVE through the sand dunes and receive a keffiyeh, a local headscarf. Next up, the “Rose-Red City” of Petra, we’ll be staying at the Hyatt tonight. We’ll need to rest up as we begin our tour of the ancient city tomorrow. 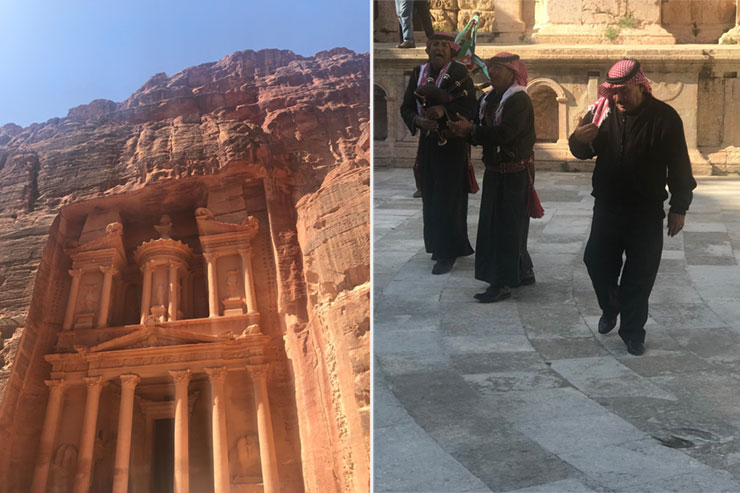 Day 10 Wednesday:
This morning we had a guided tour sightseeing in Petra, a UNESCO World Heritage Site and one of the New Seven-Wonders of the World. Lost to the world for centuries, it is in the biblical land of Moab. The views are very majestic as you walk down the SIQ, the narrow gorge made famous in the movie Indiana Jones and the Last Crusade. Everyone stood in awe in front of the iconic and famed TREASURY. Along with our friends, we took the rest of the day and hiked up the mountain to the Monastery. Now this is a steep climb, many could not make it to the top. You can take a donkey ride up the mountain if you’re not in the best of shape … we did the climb and had lunch at the top next to the Monastery. Along the way we saw spectacular temples and tombs created out of the rose-colored sandstone.

Day 11 Thursday:
This morning features Kerak, with a visit to the CRUSADER CASTLE and Wadi Mujib, the “Jordanian Grand Canyon.” Next, a 3-hour drive to our hotel at the Dead Sea for or two-night stay.

Day 12 Friday:
A fascinating day awaits! We stopped in Madaba to visit ST. GEORGE’S CHURCH, which houses a precious 6th-century mosaic map of the Holy Land. We also explored the MADABA ARCHAEOLOGICAL MUSEUM. Today’s major highlight is a visit to MOUNT NEBO, where Moses saw the Promised Land. Next is Bethany Beyond the Jordan, where Christians believe that Jesus was baptized by John the Baptist. We then returned to the Dead Sea to enjoy a farewell dinner with our traveling companions to commemorate an unforgettable journey.

The entire trip was simply an incredible experience. To visit first hand … the site where Jesus delivered his sermon, the site of David’s victory over Goliath, the Jordanian Grand Canyon and of course my wife’s favorite … Petra in Jordan.

Well, that’s it for international travel this year … I have several business trips in the U.S. planned, if there’s time to sightsee, I’ll let you know what I find!